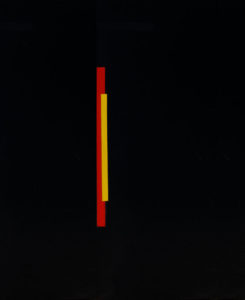 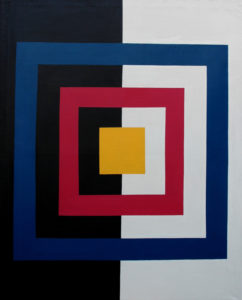 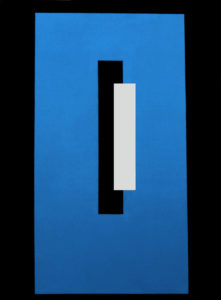 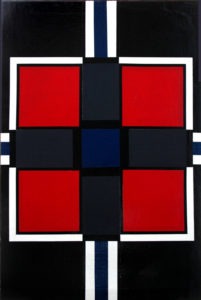 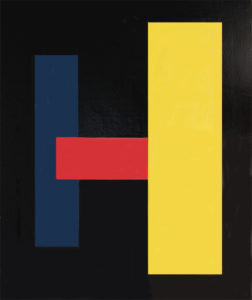 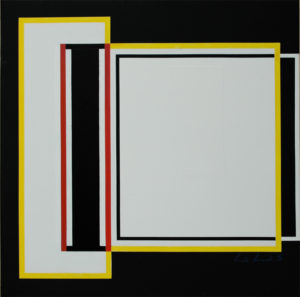 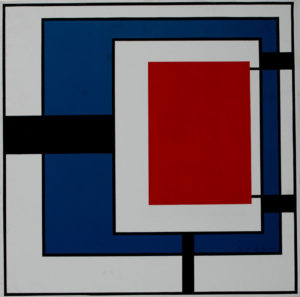 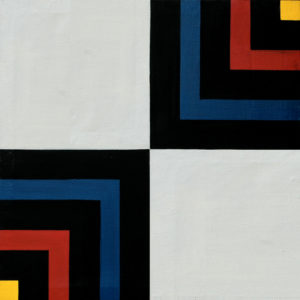 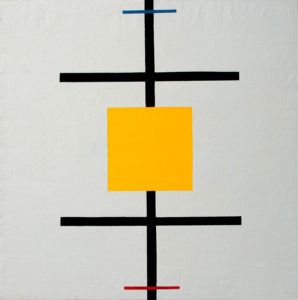 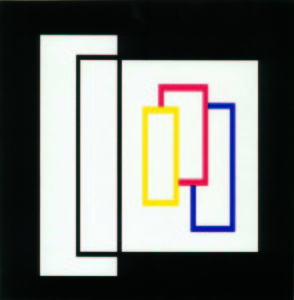 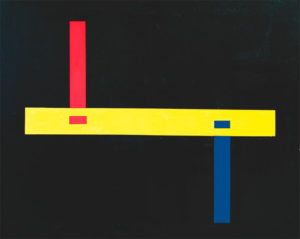 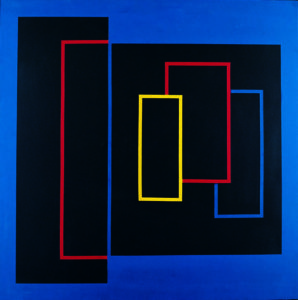 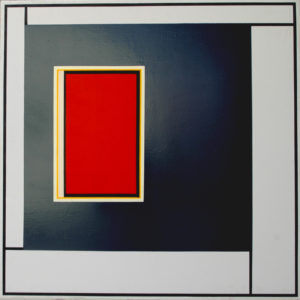 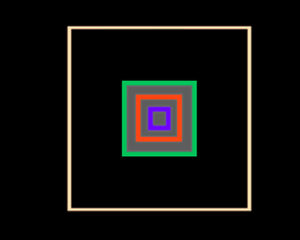 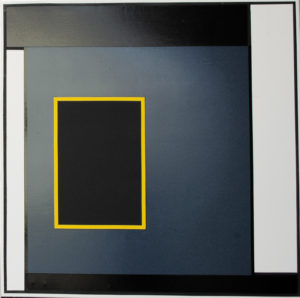 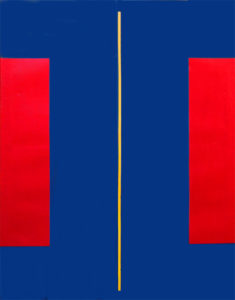 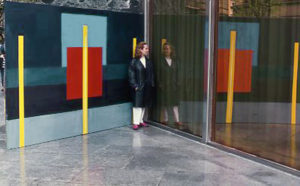 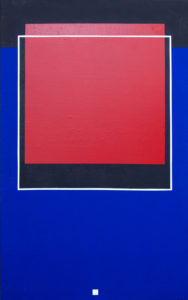 I started with a canvas divided vertically in two equal black and white parts. The exploration involved trying to find plastic solutions to the excision, by creating or achieving tridimensionality and pure spaces with the pure formal plastic elements alone: straight vertical and horizontal planes and the primary colors, yellow, red and blue. In other words, starting from Mondrian neo-plasticism, I made it evolve through synthetic measure into multiple pure interiorized dimensionalities, making the classic diagonals and curves virtual.

Below is the text I presented at the time, defi ning the Potential Image series.

SERIES: “THE POTENTIAL IMAGE”
MY ARTISTIC CHALLENGE, when I began this latest exploration three years ago, itself the evolution of many other previous processes of learning, analysis, attempts to identify an attitude and a situation and a historic commitment, was:

TO RESCUE ALL THE RICHNESS AND COMPLEXITY OF CLASSICAL PAINTING, STARTING WITH ANALYSIS AND THE MINIMUM ESSENCES INHERITED FROM THE CONTEMPORARY ERA.

TO LINK, without excisions, because that was how I felt it should be, THE APPARENT RUPTURE OF 20TH CENTURY MODERNITY, WITH ALL THE REALIST CONCERNS OF CENTURIES PAST.

The investigation I was to perform was structured as follows:

I used a computer to experiment with and analyze all the themes I had explored theoretically, presenting some of them as print-outs on a color printer.

I made a selection from all the computer-generated images that defi ned the characteristics and possibilities of the POTENTIAL IMAGE more clearly, executing them on traditional supports in synthetic, acrylic, matt ink and transparent ink media manipulated with spatulas, rollers and air brushing.

The following is my defi nition of POTENTIAL IMAGE, synthesized here
• through the conscious knowledge of each of the formal and conceptual elements that organize the plastic image.
• through awareness of the Theory of Plastic Energy as the unifying element in composition.
• one acquires the capacity to control and master the plastic components I defi ne as “new plastic potentiality.”
• Although the images produced contain all the plastic characteristics of traditional ones, by being constructed with the minimum plastic elements, enhanced by their sheer virtuality and purity, eliminating artifi ce and incoherence (naturalist tics, diagonals and curves), THEY ACQUIRE THE CAPACITY TO COMMUNICATE: IMMEDIATE – SPONTANEOUS – DIRECT.
• and precisely through becoming aware of the Theory of Plastic Energy, NEW EXPRESSIONS are achieved of displacements and movements at different velocities.
• Which means that THE CONTENTS of the images once again have major FUNCTIONAL SYMBOLIC VALUE.
• So that universal concerns about the Spirit and Matter acquire a fl uid NEW DIMENSION, through the knowledge acquired from their INTERRELATION and RELATIVITY.
• and because, from their origins, they contain PHILOSOPHICAL – ARTISTIC – SCIENTIFIC concerns