Series 20: The Transmutation of The Mind. The Capacity to Visualize The Totality. Identification, visualization and integration of genuinely feminine values. 2010-2014 paintings 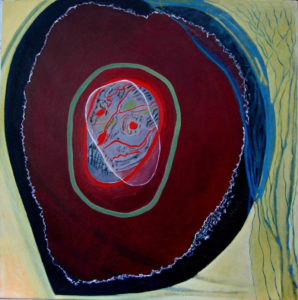 Series 20: The Transmutation of The Mind. The Capacity to Visualize The Totality. Identification, visualization and integration of genuinely feminine values, 2010-2014, paintings

It is an artistic and theoretical investigation initiated in January 2010, about the genuine feminine values, in order to create conscience, light and presence of feminine attitudes that have been always present and acting very necessarily and positively, with not social, not historical recognition . I assume that these attitudes, genuinely feminine are not sole rights of the women, but they have presence in the men and in many cases, the women are who more dramatically reject and deny them, according to the conclusions of my previous artistic –theoretical investigation, “Burnt Dolls-Muñecas Quemadas” plus “Gestation and Childbirth of Conscience. The Mimetism of the Mind”.

Part of the reasons of this rejection and denial of the genuine feminine values – his concealment – is explained precisely by this lack of update and recognition as social and human value. The different subjects on the history of the humanity that all the girls and boys we have studied always, it is the trustworthy reflection of the absence of the social value of the feminine existence. Without going beyond.

And I am not talking to the absences caused by the denial of the rights to study, to work or to occupy positions of decision´s political and social, (in what already we have advanced more and there is social conscience about that ) but to how the feminine structures have worked and how they are working for the benefit of the all, with the recognition of anybody. They are working -have been working always-, human feminine attitudes of women and of men about which one does not speak and they are not recognized as intrinsic values of the evolution of the humanity.

From my point of view the conflict of the equality, (not only of kind, but racial, political, religious, economic, etc. that the human beings we have realized along our existence), finally have revealed the mental human structure obliged to divide.

The Concept of Plastic Division, it is the artistic investigation to which I have devoted myself most of my life, across 20 series that compose the immensity of expressed, analyzed and conceptualized concepts that it is necessary to look to be able to see and to understand the questions of the human injustice and violence.

With the series that is exposed I had to face such topics as: The Capture of Conscience of the Seduction by the Power of men and women and The Complementary Submission of the Wall of the Fear, as Archetypes of the Dividing Action of the Mimetism of the Mind.

I arrived to so vital and transcendentals conclusions as: restored all the social rights for the equality of women and men, The Capacity of Visualization and of Assimilation of the Totality, create conscience, light and presence of feminine attitudes that have been acting always and that we will have to recognize as Social Human Value, for his care and transcendency for the life.

And that to understand the royal reason for which the human mind has met obliged to divide – producing with it so much inequality – we must have the courage of interfering even our more been afraid destination, which yes makes us equal: the death. Not the rational phisical death concept, but our unconscious death feeling, just for to be totally honest and to stop justifying the means: divisions; for the purpose: not being afraid, to have power, etc.

To put light in this DIVISION CONCEPT between the life and the death is being the approach of my more recent paintings and my personal conclusion, my philosofal stone after the intense researching with the 20th Series which you are seeing in Skoto Gallery, is:

If you really see The Totality, you love; if you love, you become able to choose what you really want.